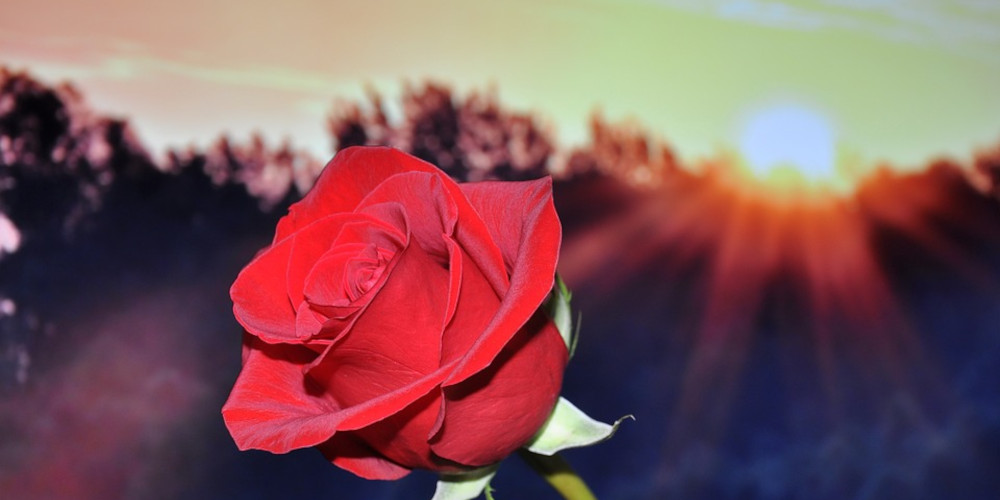 The Rose is a perennial shrub of the family Rosaceae, which contains over 100 species. The Rose comes in a variety of colours, dependant upon species and location. The shrub is native to Asia, with a few small species native to Europe, Africa and America. The majority of the species have stems lined with thorns developed over generations to protect themselves from browsing by animals.

Roses vary in size from small compact miniature plants, to climbers that can reach 7 metres in height. The shape is relatively consistent – rose leaves are sharply pointed and oval in shape. The wide variety of garden roses found today is due mainly to the fact that the plant can easily hybridise from many other different rose species.

Towards autumn, during late summer, the plants edible fruit, rose hip, ripens. Rose hips are occasionally made into cosmetic skin and facial products, as well as jams, marmalades and jelly.

In horticulture, roses are propagated by planting cuttings. Plant’s to cultivate are selected for their flowers, climate tolerance and growth habits. During the growing season, Roses require around 5 hours of direct sunlight each day. During the winter months, Roses enter a dormant stage to evade continuous frost damage.

Many thousands of variations of the plants exist today due to cultivating cross breeds. Most of these hybrid plants are double-flowered, with many or the entire stamen having mutated into additional petals.

Cultivating Roses dates back as far as 1840, to an early Victorian garden cemetery and arboretum in England. In the past Roses were bred for their scent, however in more recent times rose breeders emphasized size and colour with little scent.

Because of the wide variety of Roses, there are only three lose classifications of Roses; Wild, Old Garden and Modern Garden.

Wild roses are found outside of gardens historically, however a few breeds such as ‘Rosa Moschata’, the Musk Rose, and ‘Rosa Banksiae’ Lady Banks’ Rose are now commonly grown in gardens also, to name a few.

Old garden roses are of European or Mediterranean origin typically, and are double-flowered, blooming only once. The flowers are notably fragrant, and bloom in shades of white, pink and red. The classification of ‘Old Garden Roses’ is generally accepted as any rose breed created before 1867, when the first ‘Modern’ rose was cultivated.

Modern roses classification can brig with it some confusion, as many are modern variations of their ‘Old’ past cultivars. Classifications tend to be by growth and flowering characteristics, such as “cluster-flowered”, “recurrent, large-flowered shrub” or “ground-cover non-recurrent”. Despite the large variety clearly on offer, there is a handful of dominant notable classifications, namely: Hybrid Tea, Perentiana, Polyantha, Floribunda, Grandiflora, Miniature, Climbing, English “David Austin”, Canadian Hardy, Landscape and finally ‘carpet’ roses.

The horticultural art of rose-pruning is one much talked about. Dependant on the time of year, the type of rose and the reason for pruning, each attack needs to be carefully thought out. Generally, older varieties flower only once per year, so their pruning requirements are minimal. Removing old spindly canes will make room for new growth in the following season.  Canes that are only one year old should not be removed, as they carry the following years rose buds. The shrubs themselves can also be lightly pruned following the fading of the blooms. The aim should be to reduce the height and width of the plant.

Modern garden roses, however, require a lot more attention to their ‘older’ counterparts. Modern roses planted in colder conditions will require a much harsher pruning attempt too. These hybrids should have their canes reduced to between 8 and 12 inches in height in early spring. Due to the ancestry of the newer plants (China rose), they cannot stand up to similar temperatures in comparison with European ‘older’ roses. Low winter temperatures kill exposed canes. Most gardeners coincide this pruning with the blooming of Forsythia shrubs. Canes should be cut approximately ½” (3cm) above a vegetative bud when pruning, and at an angle of forty five degrees (a diagonal line from upright).

When weak, damaged or diseased growth is found, it should be cut away completely regardless of the amount or time of year. The cutting angle is important to reduce the risk of disease, as well as allowing further growth to generate quicker.

“Deadheading” is the act of cutting away dead, withered or discoloured flowers from the shrub whilst during the blooming season. Deadheading plants encourages them to focus energy and growth into blooms rather that fruit production, and this is true for roses. For flower sales and shows, deadheading also serves the purpose of removing unsightly blooms.

When deadheading, remove all growth above the first 5-leaflet leaf from the shrub upwards, not the base of the plant. Leaving this growth encourages further branching and flower production possibilities.

Continual blooming roses get the benefit from continued forming of growth and new blooms, whereas older “once-blooming” roses continue to product green growth, even though new blooms will wait until the following blooming season.

Rose Rust is just one of several diseases that roses are susceptible to. Rose Black Spot and Powdery Mildew are two of the remainders.

Fungicidal diseases in the rose are solved best via the use of a preventative measure of fungicidal spray. Once a disease has settled in, the infection cannot be reversed. It can however be controlled by fungicide use and effective pruning.

Aphids are the main problem in rose gardens, as they suck sap from the rose plant, therefore weakening the stem. Ladybugs are a predator for the aphid pests, and should be encouraged when near rose shrubs.

Spraying of roses with fungicidal spray is the most effective way of preventing rose disease, however its use should be controlled to minimise the effect on beneficial insects such as the Ladybug.

Uses of the Rose

Roses mean many things to many people, and have various different purposes in different industries. Rose oil is commonly used in perfume Rose oil is created by steam distilling crushed rose petals – a method refined from ancient Persia. Roses are also portrayed by artists, such as the famous Monet, although many fine artists have rose paintings amongst their works.

The rose has always been admired for its beauty, and as such has a long history of representing countries and people. Roses are ancient symbols for Love and Beauty, and the word rose comes up in many languages and religions.

Finally, along with much of the continuation of symbolism and retail, the rose is still used for decoration in the family home and garden. Due to the rose shrub enjoying the temperate weather found here in the majority of the summer months a family garden is a very suitable location, however for extra protection over winter, keep it safe in a suitable storage area, such as a log cabin.

Can I Live in My Shed, Log Cabin or Summerhouse in the UK?

Shed Storage Ideas: How to Organise a Shed

What Are the Benefits of Having a Pressure Treated Shed?