The Feminisation of the Garden Shed 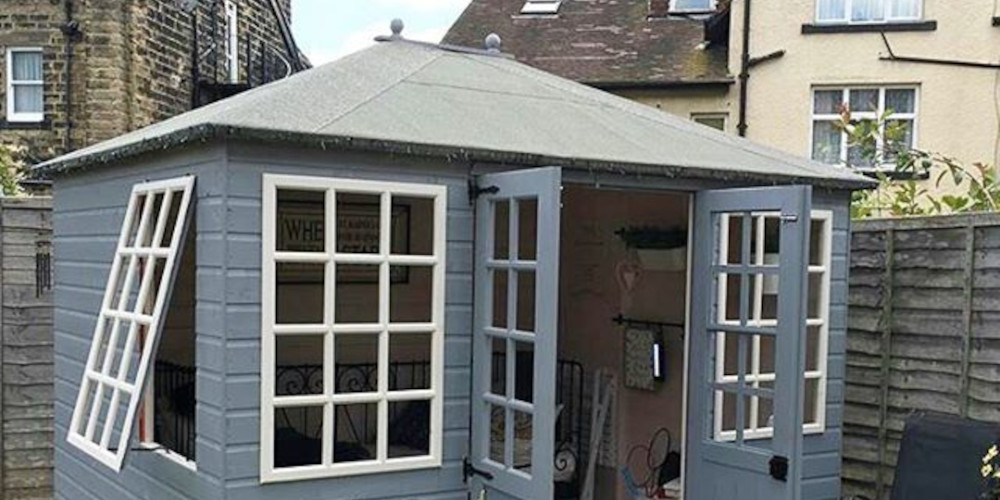 Find out about the feminisation of the Garden Shed.

The image off the garden shed as a sanctuary for men may no longer be an accurate representation of its role in modern home life. Until recently, the general consensus was that a shed is a testosterone fuelled environment, a place where men can escape to without distractions. Consumer trends show that the days when men were free to retreat to the garden shed and potter about as they pleased are numbered. No more will beer cans and cigars be found in abundance at the back of the garden hut. No more will a shed be an exclusive zone where men can refine their carpentry skills on a job that probably isn't worth the invested time and effort. Why? The women are moving in. Thanks to the inspiration of interior designers and home improvement programmes, women have adopted the notion that garden sheds can be useful spaces for their amusements too; tool kits, sports memorabilia and mini beer fridges are being replaced by designer sofas, romantic novels and scatter cushions. Concordantly, surveys have shown that the number of women employing ‘shed space' (as either an extension to their homes, or as an outdoor haven) has risen to 40%, and will continue to rise further. Indeed, it would appear that the secret of the precious, extra breathing space so graciously provided by the garden shed has been revealed to all, and in so doing has exposed the versatility that the space can potentially provide. In-law evasion could be coming to an end as the deafening sound of the wood saw is silenced, and no longer drowns out the exasperated call of a distant wife. Nor will a man be able to stay home and finish ‘that last bit of painting' forcing his partner to fly solo at the salsa class they ‘both' signed up for. A whole new breed of excuses is required. Undeniably, the situation looks grave for the shed men of today.

More and more sheds are turning into artist studios, lean-to bars, miniature spas, relaxation rooms and offices. Sally Coulthard, author or ‘Shed Chic states that “sheds are no longer neglected outbuildings or decorative afterthoughts at the bottom of the garden,“they are equally successful as spaces in which to indulge creative pursuits or to make a well-considered home-from-home. This change in perception of the shed and the additional uses it brings, may seem beneficial to an entire household; however sales of Shed Chic have so far been dominated by women, showing that men may not be as eager to let go of their idea of what the role of a shed should be.

Ideal Home Magazine; gives some basic steps that some might take when transforming a shed into the home-from-home that Coulthard describes:

Paint it mint green and sky blue, then, add some classic wicker furniture for the ultimate retreat at the end of your garden.

Give it a homely feel with cushions in retro floral prints and a pretty painting. Add a rug for extra comfort, and hang a voile curtain across the door so you can shelter from the sun but still enjoy the breeze. Put up a shelf to store all your favourite books, along with some lanterns for evening reading.

These changes in style seem far from the previous ideas and uses for a shed described by Gareth Jones in his 2004 book, ‘Shed Men.' Contrastingly from Shed Chic, Shed Men “examines the quirky phenomenon of sheds and sheddism, arguing that a bloke's shed begins where a boy's room leaves off, providing a home to the prized objects and boyish dreams there is seldom room for inside the house. How times have changed.

However, to all men who are mourning the loss of their trusty haven, you should take a moment to consider those less fortunate than yourselves. While the western world has until now regarded the garden shed as a primarily male dominated environment, in other cultures it would seem that this sacred right of men has always been absent. In India for example, you may stumble across a rather more alternative (if not a little disturbing) use of the garden shed. Buried in the Pudukottai region of India is a village named Narikudi, consisting of no more than 102 families. Here in this remote community you will encounter a collection of sheds, constructed entirely with one purpose in mind; to accommodate the women. So how did they get so lucky? Well, hold on a second. It seems these carefully constructed allotments exist solely to house women of the village during a particular few days of the month. Now, whilst at first this may seem reasonable, upon further thought, using a shed to shut a woman away for five days may be extending its versatility a little too far. However in this same village it would not be considered unusual for a woman to go through all the traumas of labour with nothing but the humble comforts of these rudimentary shacks. Nonetheless, this tradition, locally known as Poyyalamman, is a highly cherished and respected part of life; here the women voluntarily enter into this form of confinement with the firm beliefs that they are partaking in a prestigious ritual. According to Mamanga, a mother of seven children, “Poyyalamman protects us all. It would seem that here, the infiltration of women into the world of the garden shed has been taken to an entirely different level.

Similarly, deep down under on the Australian coast, an equally alarming concept had been born: the Sheila Shed. These sheds are designed specifically for the past times and delights of women. In the town of Kempsey ‘sheilas' congregate regularly in large sheds to teach each other the best ways one can create a chopping board, or a bread bin, with the assistance power tools. The idea was born to create a women's equivalent of the “Men Shed'' society which had previously existed in Kempsey in isolation. While this way of life is unlikely to catch on everywhere, it's clear that a definite shift in the world of the garden shed has taken place. The media has introduced home improvement as an activity for both sexes and that, along with an economic downturn, has encouraged a change in attitude toward that little bit of extra space sitting at the bottom of the garden. Jan Heffernan of Kempsey, Australia sums it up, “I go to shops and look at power tools now instead of knitting needles."