Our spooky creations. Flick through the gallery to find out what happens to a pumpkin in a timber mill...
Meet our pumpkin
He's about to have a very bad day
Sometimes you eat the pumpkin... sometimes the pumpkin eats you...

Have a look at what the Tiger Sheds team got up to for Halloween, and read about the origins of the holiday. Scroll through the picture gallery above to see what happens to a pumpkin in a timber mill…

Where Does Halloween Come From?

Halloween is many people’s favourite time of year. Things get a bit spooky, you can dress up, and massive tubs of sweets go on offer at the supermarket. Sweet!

Nobody is really sure, but some believe Halloween has its origins in the Celtic Pagan festival Samhain – ‘Summer’s End’ – which celebrated the end of the harvest season.

Those celebrating believed that the end of the harvest meant the walls between our world and the spirit world became thin, enabling spirits to pass into the human world and damage crops. People would offer food and drink to appease the spirits, and light bonfires to ward off evil.

People would also sometimes dress up as spirits and demons. If you met something that went bump in the night, you’d want it to think you were one of them – right?

The Catholic Church wasn’t too thrilled about Paganism, and continued its tendency to take over holidays that weren’t associated with Catholicism. Thus began ‘All Hallows Eve’, the day before ‘All Hallows Day’, also known as ‘All Saints’ Day’. This was a day to celebrate saints, known or unknown, who had died. But the tradition of dressing up still continued. 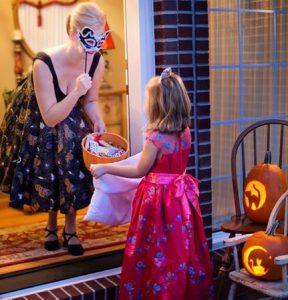 Poor children, and sometimes adults, in the Middle-Ages would dress up in costumes and beg for food or money door-to-door. This would be in exchange for songs or prayers, typically for the dead.

Fast forward to today, and trick-or-treating is the best way of getting free food. Unfortunately, it’s frowned upon for adults to go out begging for sweets (unless you go with a child…) 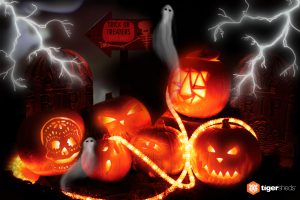 We’re glad you asked! Legend had it that Stingy Jack double-crossed Satan by convincing him to turn into a coin, after not wanting to pay for a drink. Jack then kept the devil trapped in the coin by keeping it next to a cross. Jack made a deal to release Satan, on the condition that he wouldn’t be sent to hell.

When Jack died, he wasn’t allowed in Heaven because of his evil tricks, or Hell because of his deal. The Devil gave him an ember from the fiery underworld, Hades, and Jack put it in a hollowed-out turnip. He was then doomed to eternally wander the Earth with no final resting place.

As this story travelled across the globe, turnips were eventually replaced by pumpkins. Thus the jack-o-lantern was born! 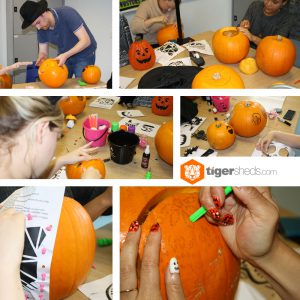 Have a look at this stencil for an easy way to carve your own Tiger Pumpkin!

Want some handy decorating tips that don’t involve carving? Check out these 5 unusual ways to decorate your pumpkin. Pumpkins can be pretty tasty, too. Read our recipe roundup here.

Written By
Kiarna Benson
More from Kiarna Benson
This is one of the most creative and inspiring uses we’ve ever...
Read More